The signs are so subtle that the untrained eye might not even notice. A section of flattened earth. An old rock wall. The grove of ulu and mango trees, so old they stopped producing fruit long ago. 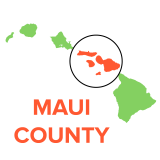 But to Rachel Hodara Nelson, each stone and subtle trace of a once-traveled path tells the story of the family who once lived here. She’s spending a sunny summer day working with a colleague to identify anything that might pose a threat to the old homesite, in what’s now the heart of the Kipahulu District of Haleakala National Park.

This is where the Po‘onika family called home until the early 1900s. Hodara Nelson knows from oral history that this is where one of the men used to sit on a bench, mending saddles. His family moved away long ago, and now what’s left of his house is a small section of flattened dirt, held up by a foundation made of stones. It looks as if the brush that’s grown up around it could soon swallow the whole place up.

“I would imagine before all these trees came in, they probably had a nice ocean view — especially if they had a two-story house,” Hodara Nelson tells her colleague, who uses a compass and an iPad to document the site.

As the archeologist for Haleakala National Park, Hodara Nelson’s job is two-fold. She’s tasked with preserving and documenting the past to better understand the present, while at the same time, working with the rest of the national park’s team to educate hundreds of visitors who arrive there each day, in hopes they will learn about its importance and care more to protect these places in the future.

“There are not that many places you can go in Hawaii where you can see archaeological sites and experience them,” Hodara Nelson said. “Our public lands are probably one of our best opportunities for preservation.”

In this day and age, there are so many threats that can endanger the remains of the past. Tree roots can dislodge fragile structures; cattle can trample over them. Flooding and coastal erosion can wash away years of history.

Then, of course, there are the humans, who have over the decades built on top of these places across the Hawaiian islands. And, even after sites have been protected from development, they can still be damaged by something as simple as someone accidentally stepping on them.

But in recent years, national park employees like Hodara Nelson, who was hired to oversee archeology for Haleakala National Park in 2015, have been able to tap more federal funding and put more focus toward preserving these places. For many of the park’s employees on Maui, they see it as a chance to work on restoring the land to what it may have looked like long ago.

In the Kipahulu District, most of the crew are from East Maui. In some cases, their parents and grandparents worked for the national park. Stewarding the land is in their blood.

Protecting this place is personal to Hodara Nelson, too. She grew up in Makawao, and some of her favorite childhood memories were made in Haleakala National Park, camping with her family in Paliku and Kipahulu, where they had a favorite spot to pitch their tent under the hala trees.

As an adult, that’s made her work even more exciting: As the national park’s crews have cleared away brush in Kipahulu, they’ve exposed things that were hidden when she was a girl.

“Everywhere you look, there’s a dry stack wall or a terrace or some sort of physical evidence of past human modification of the landscape,” Hodara Nelson said.

Haleakala National Park stretches across more than 30,000 acres, from the 10,023-foot summit to the pastures of Kaupo to the rocky shoreline of Kipahulu. From mauka to makai, these places sustained thriving Hawaiian communities for centuries.

Since the first people arrived on Maui, the summit was viewed as sacred, a place to hold spiritual ceremonies, commune with the gods and to collect precious resources to shape into weapons and tools, according to the national park. The trails that run through the summit area are centuries old, pathways that served as the main thoroughfares from west and central Maui over to the east side of the island. Along the way, there are several structures that were used as temporary shelters for travelers.

Kipahulu was a flourishing population hub. Researchers believe the community was settled anywhere from about 640 to almost 900 years ago. Although many of the old house sites were destroyed when the plantations came to cultivate sugar in the late 1800s, there are still heiau, fishing shrines, garden walls and other signs of infrastructure that once sustained the community standing today.

But over the years, many of those places were hidden by the brush. Now, national park crews are focused on trying to uncover and restore those places, little by little — like the remnants of the rock wall that stretches up toward the mountain from the coastline, which Hodara Nelson believes once served as the dividing line between sections of land.

Last year, crews did the same with another old wall that stretches almost three-quarters of a mile, along the edge of the campground, from one side of the park to another. But they soon ran into a problem.

On a breezy summer afternoon, Eharis, Hodara Nelson and a handful of other colleagues stood in front of the wall; they needed to come up with language for signs to discourage visitors from disrupting the site. Eharis suspects it may have been built in the years after King Kamehameha was first gifted cattle, in hopes of shielding the animals from trampling a fishing shrine along the coast.

“I like your theory that this all might have been constructed in order to protect these sites,” Hodara Nelson told him.

Hodara Nelson has often partnered with Eharis on projects, because in Kipahulu, he knows this place better than anyone. Decades ago, his father was part of the crew who went “bushwacking” to document the archaeological sites in what was then the newest section of Haleakala National Park. His mother worked there, too, and sometimes he accompanied them to work.

In 1979, when he was 16, he started volunteering at the park, trapping mongoose and rats. Today, he’s 59, and still working there. Over the decades, he’s done almost every job there is, from helping with interpretive hikes to occasionally rescuing visitors to constructing miles of fence lines that protect parkland from deer, pigs and other invasive species —  that’s one of his most proud accomplishments.

The task at hand, today, however, isn’t quite as physically intensive. After checking on the wall by the campground, Eharis, Hodara Nelson and the rest of the crew head up toward the Po‘onika homestead, where the archaeologist spent the morning surveying its walls, foundation and the remnants of a pen where the family used to keep their animals.

In the months to come, the park crews want to continue restoring the place. They’ll keep working on clearing out all the vines and brush. In the surrounding area, they want to cultivate native plants, so it looks closer to how it may have appeared centuries ago, when more families lived there.

“These walls have been here for hundreds of years,” Hodara Nelson said. “We’re just trying to leave them in place so that our grandchildren can enjoy and learn from them.”

Civil Beat’s coverage of Maui County is supported in part by grants from the Nuestro Futuro Foundation and the Fred Baldwin Memorial Foundation.