HANA, MAUI —This remote East Maui town, a tourist draw set among lush fields and a sparkling bay, has deep roots in Hawaiian history and tradition. It is the site of the first Hawaiian fishpond, according to Hawaiian mythology. It is the birthplace of Queen Ka‘ahumanu, first wife of King Kamehameha I, unifier of the islands, and it lays claim to fame as a sought-after region by ancient invaders due to its precious natural resources.

Hana remains about 80% Native Hawaiian, but use of its indigenous language had been slowly fading with the passing of generations.

In the last several years though, Hawaiian language has made a comeback around town.

It’s evident in signs at the Hana Ranch Store for items like “naaukake amelike,” the Hawaiian name for a hot dog; in the cheers heard on a community baseball field during kids’ games; and through a popular Hawaiian language and culture family engagement program called Hui Kipaepae offered through the Hawaiian immersion preschool, Punana Leo.

“We’re strong in culture but what really lacked for many, many years was our language. And that’s what we’re revitalizing now. Because now we’re making the connection of our culture and language and it’s making a change in our community,” said Kaimana Cabebe, a Hana native who is a site coordinator for Punana Leo. 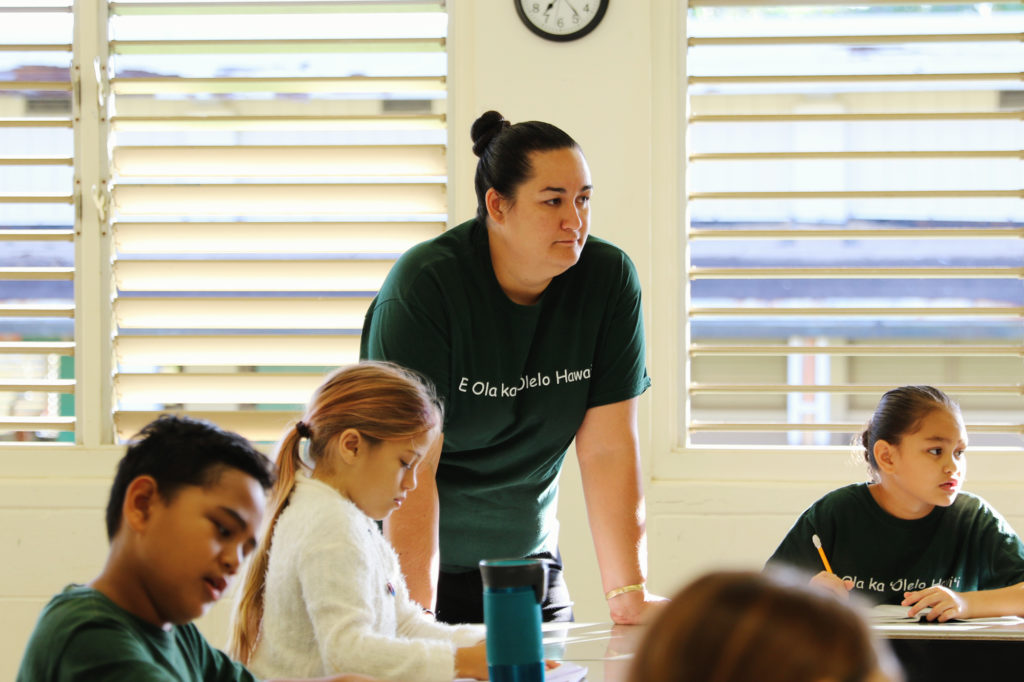 Kumu Kili’ohu Thomas teaches language arts to her third graders. She went through immersion schooling herself and said the system is more like an ohana, or family.

What’s caused this transformation? Many believe it has to do with a movement that took hold in 2014 to establish a Hawaiian language immersion program at Hana High & Elementary, the town’s only public school serving grades K through 12.

Opened the same year as the Punana Leo center — in 2016 — with just a kindergarten class, the immersion school has added a new grade each year. It now boasts more than 60 children enrolled in grades K through 3, with a fourth grade to be added next school year.

The goal is to eventually have the school offer Hawaiian language immersion through the 12th grade.

“A small group of dedicated Hana families got together because they desired to bring back our language to our community,” Cabebe said. “They identified interested families, staff and began the search for a facility in Hana.”

So much interest has been generated in Hana’s DOE Hawaiian immersion program, known as Kaiapuni, that the traditional elementary program enrollment is dipping as families with young children increasingly favor the immersion option, according to Principal Christopher Sanita.

Kindergarten is being combined with the first grade at the main school, while the second and third grades may have to be combined next school year due to the low student numbers, he said.

“It’s kind of what we have to do,” Sanita said. “Where the numbers are going, it seems we’ll have predominantly, maybe more, Kaiapuni kids possibly.” 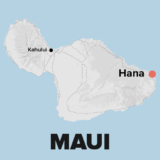 Established in 1912, Hana High & Elementary has 363 students total, some who come from communities as far away as Keanae (a 45-minute drive to the west) and Kaupo (an hour’s drive in the other direction).

Sanita, a Southern California native who came to Hana in 1998 and started out as an English teacher at the school, welcomes the growing enthusiasm over the immersion program. 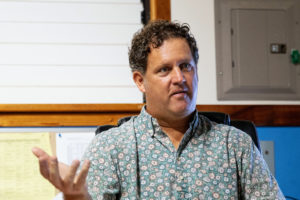 Hana High & Elementary Principal Christopher Sanita says the immersion program is not for everybody.

Sanita said he’s talked to former students — now parents themselves — who, with the entry of the Kaiapuni program onto the scene, are more vested in education for their kids.

“These are people I used to teach that didn’t really like school but now they’re choosing to put their keiki in their classes and they’re going to education classes. It’s awesome,” he said.

That spillover effect into the community is evident in other ways. The Hawaiian language classes offered through Punana Leo’s Kipaepae program every Wednesday from 4:30 p.m. to 6 p.m. sees packed attendance, according to Sanita.

The renewed interest in Hawaiian language and culture is evident across the greater system. The Hawaii DOE this year began offering all of its employees free introductory Hawaiian language classes through UH campuses.

Sanita adds that the school’s Hawaiian immersion program is not for every family, only those who are intentional about its purpose and want to seek a cultural education for their kids.

Connections To Hawaii’s Past

For Cabebe, questions about the value of immersion education have answers in Hawaii’s past. A time when respect for one’s elders, neighbors and community defined the way of life. When attention to detail and orderliness was commonplace.

“We really focus on that,” Cabebe said, speaking of kaiapuni’s teachings. “It’s disappearing (those value systems), which is the sad truth. We are trying to purposefully put in systems that naturally grow those behaviors.”

At Hana’s immersion school — housed in a separate building once used for traditional elementary classes — students are instructed to line up their slippers neatly outside their door (it’s barefoot only inside) or, if they are the older sibling at home, maintain that role within the classroom by looking after their peers who are younger siblings at home.

“We use the family system as a basis,” said Cabebe, a father to a 5-year-old boy and 1-year-old daughter. His wife, Nehelenani, is a kindergarten teacher in the immersion program. 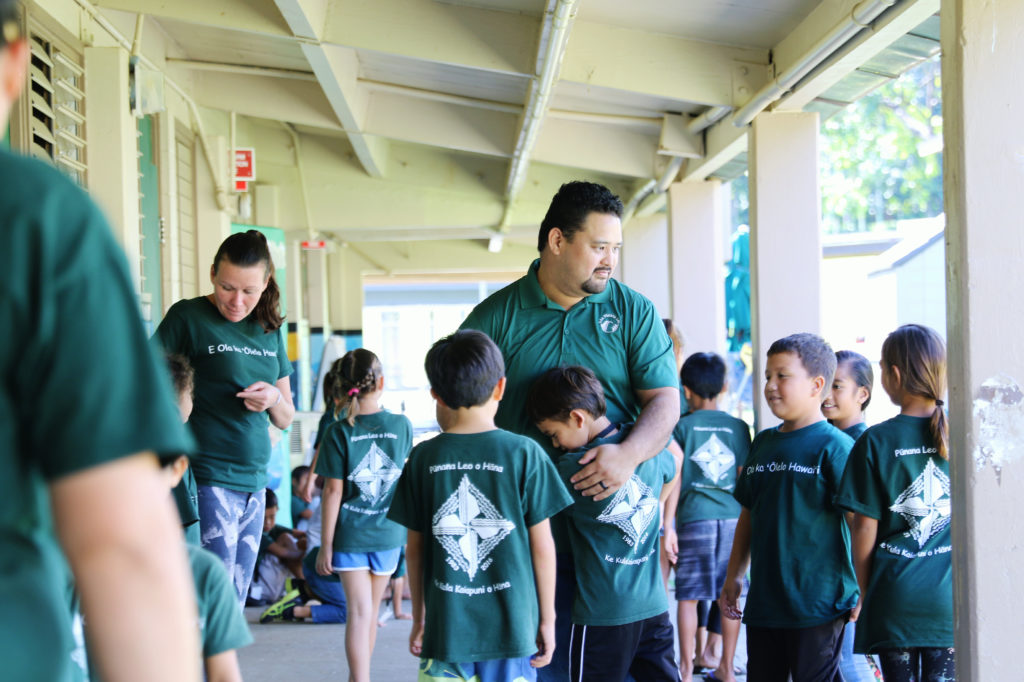 Kaimana Cabebe, a Hana-born site coordinator for Punana Leo preschool, greets students in the DOE Kaiapuni program at Hana Elementary. The immersion program has grown so popular that enrollment is dipping in the traditional elementary program.

“The family unit really drives the way we work with our keiki,” adding, with a chuckle, that while instructors may “scold the kids a little harder, they also love them a little harder.”

Education is focused on the natural environment as the basis for instruction. During a recent visit to the school, second graders in Kea Gulino’s class lined up in a row about 10 feet away from a school garden, verdant leaves sprouting abundantly from the soil.

They didn’t immediately enter, but first participated in a brief ritual.

They were instructed by Gulino to seek out physical signs that granted them permission to enter. Such things like the leaves rustling, the sun shining, the sound of the wind, the birds.

Only then, after participating in a chant, did they step inside the garden. Using rulers and composition notebooks, they worked on mathematical concepts like area and perimeter.

The Hawaiian language “wasn’t a part of our everyday life until we entered Hawaiian immersion,” Moani Aiona, school counselor and parent of a second grader in the program

Hana’s immersion students are predominantly Native Hawaiian, from families who’ve lived in Hana for generations. For many of the kids, Hawaiian is their first language and they speak it at home.

Instructors do not revert to English at any point during the 7:30 a.m. to 2 p.m. window the students are in school. The teachers speak to non-Hawaiian-speaking parents privately in English if a kid is within earshot. 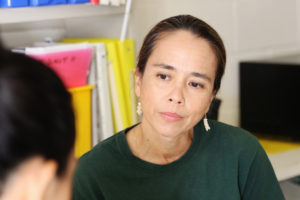 Hawaiian immersion educators emphasize the benefits of being fluent in two languages have on a young person’s brain. Research has shown such children have a cognitive advantagebecause they can easily flip between two languages.

They also combat any notion the kids will lag in English as a result of immersion schooling, pointing out the language is all around them as is — in life outside school and by virtue of sharing school grounds with traditional students.

Many adults welcome the effect immersion education has had in their own households.

The Hawaiian language “wasn’t a part of our everyday life until we entered Hawaiian immersion,” Moani Aiona, a school counselor and parent to a Hana immersion second grader, said. “It’s brought Olelo Hawaii into our home, and quite quickly … because he learned very quickly.”

An Education For The Adults

From a grown-in-Hawaii standpoint, Hana’s Kaiapuni teacher workforce resembles somewhat of a dream team: among its four certified teachers, one was born and raised in Hana, one was born on the Big Island and is married to a Hana native and two attended K-12 Kaiapuni immersion schooling themselves and now want to give back to the community.

“To me, it’s about kuleana,” said Gulino, a Hana native and 2005 graduate of Hana High, who is Caucasian. “It’s not about if you’re haole or Hawaiian. If you understand what it is to auamo kuleana (take on a responsibility), that’s why we’re here, that’s what it’s all about.”

The immersion side’s teacher workforce, with its deep ties to the community, is a bright spot amid the state’s perpetual challenge of staffing remote public schools. 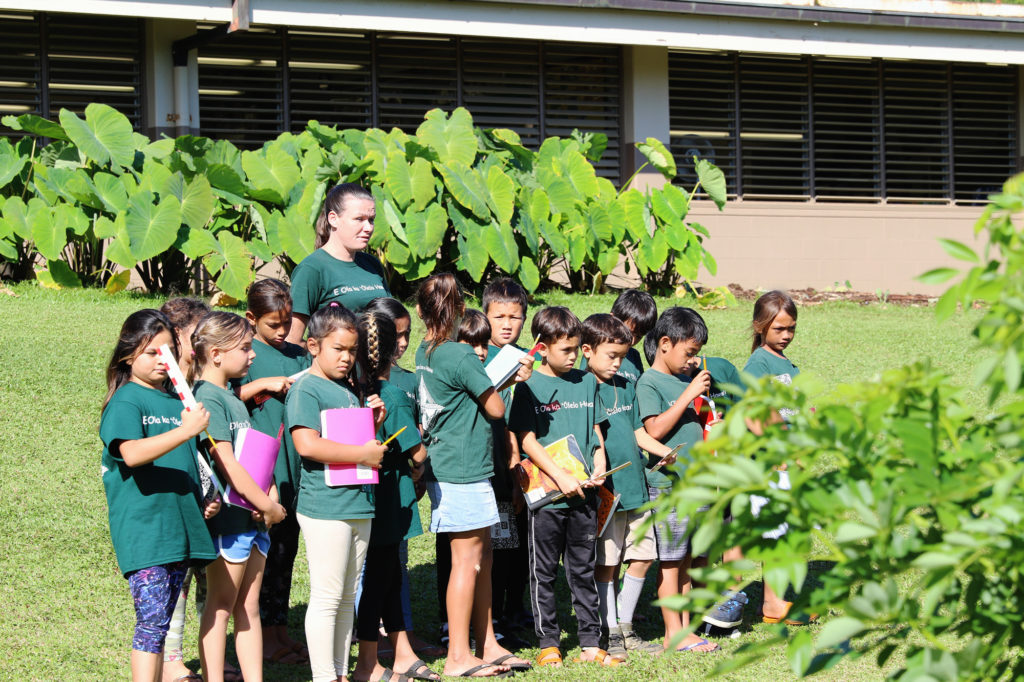 Kumu Kea Gulino stands with her immersion second graders before they enter a school garden to work on math concepts like area and perimeter.

If one isn’t from Hana or is connected to someone who is, a recruited teacher’s stay may not be long. In Hana, there are few places to live and costs are high. A gallon of milk costs $13, gas $5 a gallon and shopping consists of two small general stores. Teacher housing is available but limited, usually occupied and available for only up to three years.

A veteran teacher from the mainland hired last year to teach high school science at Hana left after only six months due to family obligations back home, according to the principal.

So locals like Cabebe who want to come back to Hana are its pipeline to the past.

Cabebe, 32, returned to Hana four years ago after a decade on Big Island, where he got his B.A. degree in Hawaiian studies and master’s in indigenous education from UH Hilo.

As for kids in Kaiapuni, he said the hope is that they, too, may stay and one day give back.

“We would hope that if they do go away, they might think to come back. If you live in Hana, your kuleana is to pass on the knowledge of what Hana is.” 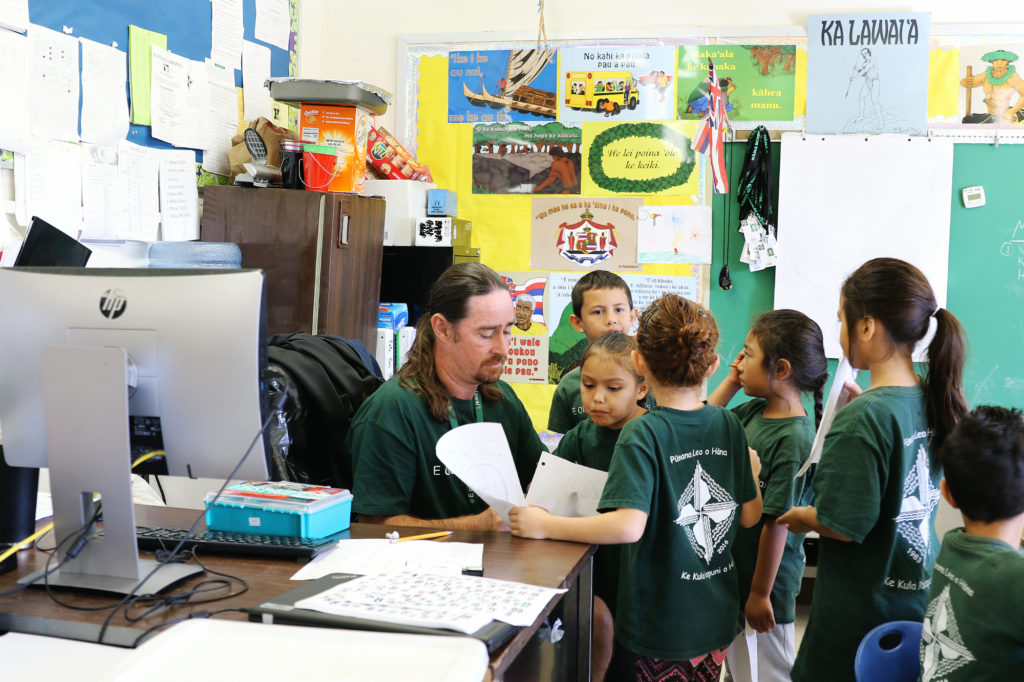 First-grade immersion teacher Paolo Burns, fluent in Hawaiian, is a veteran Hana teacher who came over to the immersion side when it was first established in 2016.

One thing immersion educators stress is that the school is helping build among Native Hawaiian students a strong sense of identity and pride in their culture.

That self awareness, according to first-grade immersion teacher Paolo Burns, a Caucasian who speaks Hawaiian fluently and is married to a Hana native, is helping keep the Hana community more tight-knit as it undergoes changes with an influx of outsiders, flow of tourism and people moving away.

“I think it’s going to really, in a sense, save Hana to still be Hana a few generations from now,” he said.