An idyllic life on a Hawaiian island became a living hell as an unseen enemy ravaged his body. But how did it get there in the first place? 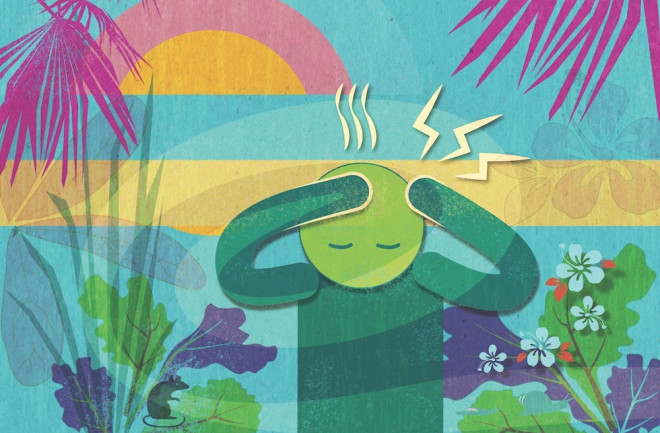 Jacques “Leokane” Pryor loved his life in Hana, a remote Eden on the island of Maui, known for graceful seabirds and gentle rains. By day, he worked outdoors; at night, using his Hawaiian name, he sang and performed native dances at a hotel. In Hana, Jacques was content. Then his perfect life as a keiki o ka ‘aina (“child of the land”) changed.

First came the itch, fever and painful joints, followed by a migrating rash. Over several weeks, his doctor became increasingly perplexed. Then serious headaches set in. Jacques called Chad Meyer, a physician who had once practiced in Thailand and seen his share of unusual ailments.

Meyer listened, scanned Jacques’ labs, then spoke with surprising force. “What you need is a spinal tap. First thing tomorrow, meet me on the other side of the island.”

As his partner rounded the curves on the next day’s drive to Maui’s largest hospital, Jacques wondered if he really needed a spinal tap. Before his illness began, Jacques was an energetic man in his 50s who had always lived a healthy, natural life. Nonetheless, he agreed to the test, and his spinal fluid showed a startling clue — cells called eosinophils, sometimes found at higher-than-normal levels in the blood of patients with certain parasites, but almost never in spinal fluid. A second test of the fluid later performed in Honolulu detected DNA of one parasite in particular; this confirmed that, four weeks earlier, Jacques had ingested invisible larvae of an adult nematode, or roundworm, typically found in rats. By the time Jacques reached the hospital, not only had those larvae penetrated his gut and wandered through his body, but they had also reached his spinal cord and brain.

The next step was treatment. While hospitalized, Jacques received drugs for pain, anxiety and elevated blood pressure as well as high-dose steroids meant to reduce inflammation wherever his parasites had lodged. After returning to Hana, Jacques eventually stopped the steroids and his rashes and headaches slowly abated. But two years later, Jacques was still suffering debilitating symptoms, including daily burning pains and an abnormal gait. After consulting other specialists in Hawaii, he eventually came to California. That’s when he reached out to me seeking further treatment.

As a tropicaL medicine specialist, I first encountered angiostrongyliasis, or rat lungworm, in Taiwan in the mid-1980s. Nonetheless, when I want serious intel on Angiostrongylus cantonensis (the parasite’s formal name), I turn to Lawrence Ash, a fellow University of California, Los Angeles, professor. Although most renowned for his book Atlas of Parasitology, in the early years of his career, Ash studied rat lungworm. In doing so, he was following in the footsteps of previous researchers in Asia and Australia. In the 1960s, on the other hand, it was Ash himself who reported lungworm larvae in rats in Hawaii for the first time.

By that time, the parasite’s complex life cycle was also better understood. Rat lungworm’s principal hosts are rodents that harbor full-grown worms in their pulmonary arteries and shed first-stage larvae in their feces. Then slugs and snails — so-called “intermediate hosts” — eat that larvae-laced matter. The cycle normally continues when new rats devour the infected snails or slugs.

Here’s the twist: So-called accidental hosts, including birds, dogs, horses, crustacea or even people can also consume infected mollusks and other larvae-ridden foods and suffer a different fate than that of rats. A. cantonensis larvae still migrate to the brains and spinal cords of human hosts as they do in rodents, but in humans, the larvae eventually die before completing their life cycle. (In other words, although an infected human sometimes falls gravely ill, he or she will never transmit parasites to another animal or person.) As for the item of food that launches the infection, it could be something as simple as a poorly washed salad or a smoothie made from leafy greens hiding a small A. cantonensis-infected slug.

So, the vehicle for Jacques’ infection seemed straightforward enough; at the time of his exposure in 2017, Jacques had eaten salads containing locally grown greens nearly every day. But how did he and his parasite cross paths in the idyllic enclave of Hana? The answer lies not only in what he ate but also in the path of invasive species that continue to circumnavigate the planet.

As its name suggests, the Asian semi-slug is not native to Hawaii. Instead, like the giant African land snail — another common A. cantonensis host — the species arrived from afar, likely clinging to a tropical plant. Entering Hawaii in the 1930s, the African land snail may have been Hawaii’s first rat lungworm vector. The semi-slug, in contrast, was not recorded on Oahu until 1996, or on the Big Island of Hawaii until 2004. Finally, not long before Jacques fell ill, the semi-slug surfaced on Maui.

Rat lungworm itself is an infectious blight which has recently spread well beyond Southeast Asia and various Pacific islands. Cases are being found in some 30 countries across five continents, including in Australia, Africa, Europe, the Caribbean, and now southeastern United States. In Florida, a survey published in 2017 found A. cantonensis in 1 in 5 rats and 1 in 50 snails or slugs. In zoos in Florida, Louisiana and Alabama, primates (who presumably ate infected snails or contaminated leafy greens) have suffered severe, sometimes fatal, infections. A CDC bulletin reported that six Americans with severe angiostrongyliasis diagnosed between 2011 and 2017 contracted their infections in Alabama, Texas and Tennessee.

Today, Jacques lives in California and can still walk on the beach, work in his garden and sing. But he also suffers chronically injured nerves for which he takes several drugs. Others have not been so lucky. Every year, a few local residents and visitors to endemic areas experience far worse outcomes, including paralysis and death.

“Back in Hawaii in the 1960s, did you ever imagine how far rat lungworm might spread and how bad it could be?” I recently asked Ash, who at 88 can still recite names and life cycles of the world’s most obscure parasites without batting an eye.

“Yes, to both. When I lived in Honolulu, we already knew it could kill,” Ash said, reminding me of the first two victims on Oahu whose autopsies yielded indisputable proof. “Nonetheless, people who get very sick are still in the minority.”

“As for global spread, I think it was inevitable,” he added. “Think of all the rats and mollusks on plants that travel the world on ships.” At that point, I could almost see him shrug — except that, thanks to the world’s latest global plague, he and I were speaking on the phone.