With no enforcement, local groups set up road blocks 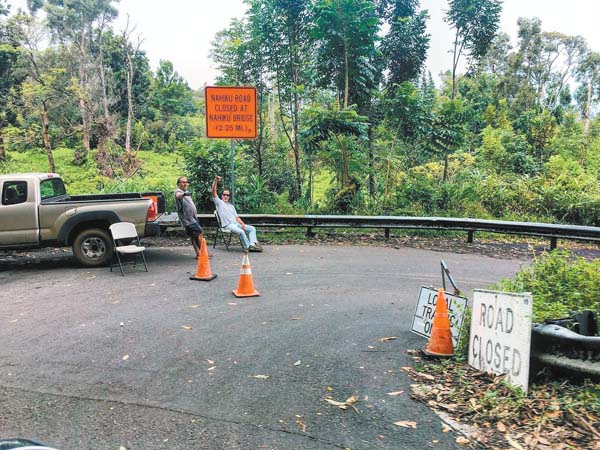 East Maui residents attempt to educate and turn visiting vehicles around on Hana Highway by upper Nahiku.  Gov. David Ige called for the road to Hana to be closed to tourists and open only to residents of East Maui. Hana Highway Regulation photo

An electronic sign is posted in front of the Haiku Community Center flashing the phrase, “restricted access to residents only,” but East Maui locals were concerned that the sign is not enough to keep visitors off Hana Highway.

On March 18, Gov. David Ige instructed the state Department of Transportation to place signs along Hana Highway, notifying drivers that the highway between Kaupakalua Road in Haiku and Hana is restricted to residents, first responders and delivery trucks only until further notice.

To further reduce the spread of COVID-19, Maui County Mayor Michael Victorino closed the back-side road, Piilani Highway, to nonresidents from Hana to Ulupalakua, and Kahekili Highway from Waihee to Kahakuloa Village.

County Managing Director Sandy Baz told the Maui County Council on Friday that there is not a lot of manpower for enforcement and that the state DOT was taking the lead.

Ige also instructed the Maui Visitors Bureau to inform all industry partners and asked rental car companies to notify customers of the restriction, but vehicles still were seen driving toward Hana earlier this week.

There has been no significant decrease in visitors on Hana Highway for recreational purposes since the restriction was first announced Wednesday and after the signboard went up Saturday, Hueu said. Kailua, Keanae and Nahiku residents were seen asking nonresident vehicles to turn around.

State Sen. J. Kalani English, who lives in Hana and represents the area, said that on a typical day, thousands of rental cars drive on Hana Highway.

“We cannot have thousands of tourists from around the world causing traffic and entering closed parks, coming into contact with one another and our residents,” English said. “As a resident of Hana, I know that the majority of our economy in East Maui depends on tourism and that this pandemic is causing a major hardship, but when we’re choosing between saving lives and the economy, health must come first.”

While residents agreed that the travel restriction was good, they called for more enforcement.

“I am concerned that without the assistance of the Maui County Police Department, local vigilantes will take it upon themselves to keep visitors from using the highway, which may lead to possibly violent confrontations,” English said in a news release Friday.

During a news conference Saturday at the Wailuku Police Station, Maui Police Chief Tivoli Faaumu said that the department is working with the state Department of Transportation to learn exactly what the directive is on regulating Hana Highway.

“If we need to take measures to ensure the highway is closed, we will do that,” Faaumu said. “But we will work together to address those issues.”

Haiku resident Ramana Sawyer, who manages the Twin Falls attraction and the farm stand, said that he closed access to the area last Wednesday in response to recent county and state announcements. He still had to turn around more than 300 people Thursday.

“The sign itself, I think it’s good. I think it has limited impact,” he said. “We saw a pretty quick reduction in the amount of tourists, but it didn’t solve it by any means.”

“We had problems at Twin Falls, where people were trying to get in,” Sawyer said. “We coned off the parking lot and put signs up and caution tape up, and people would still try to park and get in.

“Some even got physical with one of our workers and tried to push past her.”

Without further enforcement by local authorities, some residents have taken the restricted access order upon themselves, Sawyer said.

“It’s definitely every man for himself out here, which maybe wasn’t the intent, but that’s kind of what happened because we’re just trying to do what the mayor and the governor were asking, which is to close nonessential businesses,” he said. “Then the road was closed, but then there was no follow up, no law enforcement, no help on that really, so now we have residents telling visitors they need to leave.”

Sawyer also suggested adding another sign at the top of Kaupakalua Road for visitors who happen to be driving down to Hana Highway and miss the sign posted at the Haiku Community Center.

Kaupo resident and owner of the Kaupo Store, Linda Domen, said in an email that she had to close up shop last week because business “slowed down a lot.”

“There was a resident imposed roadblock just before entering Kipahulu, and I think there were a few minor problems with disgruntled tourists, but it all smoothed out,” Domen said Monday. “I’m fine with the road being closed. No income, but it’s nice.

“We live off grid for a reason, so we’re not bothered by all this too much.”

Longtime Kipahulu resident Jonathan Starr said that the LED signs “are definitely beneficial.” After leaving his property for the first time in 10 days for Wailuku, Starr noticed that nonresident traffic had “reduced, but there’s still quite a bit of it. There’s still quite a lot of young visitors.”

“Frankly, the more that it is controlled, I think the better,” he said by phone Monday. “We have to remember the reason for which we’re doing this. I mean, we haven’t left our house in 10 days. We know that it’s the only way that we can fight this thing.”

Starr also noticed on his drive the increase in fishermen on the shoreline, but they are “really spread out” to meet social distancing standards.

Starr is a member of the Kaupo Community Association; their meetings have been canceled and replaced by electronic communication. Nearby businesses in the Kaupo and Kipahulu areas also have closed, he said.

Starting today, residents were urged by Victorino to stay at home and work from home until April 30. Both Starr and Sawyer are hopeful this will further slow the traffic and combat the spread of COVID-19.

“Anything we can do to help people understand it, and try to defend themselves and not gather in groups, will help us get past this pandemic,” Starr said.

* Dakota Grossman can be reached at dgrossman@mauinews.com.