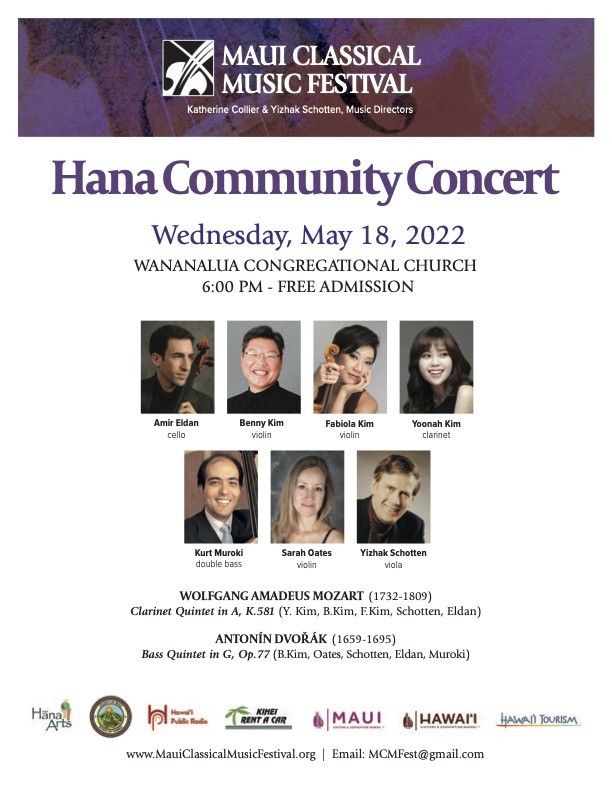 Musician bios:
Yoonah Kim, clarinet
Hailed by The New York Times for her “inexhaustible virtuosity”, clarinetist Yoonah Kim is a winner of the 2016 Concert Artists Guild International Competition – the first solo clarinetist to win CAG in nearly 30 years. Her recent chamber music appearances include performances of Messiaen’s Quartet for the End of Time with Stefan Jackiw, Jay Campbell, and Orion Weiss at Princeton University and the Crypt in New York and with the Junction Trio at Rockefeller University. Ms. Kim made her New York recital debut at Carnegie Hall’s Weill Recital Hall and has given recitals for Chicago’s Dame Myra Hess series and DC’s Washington Performing Arts series, among others. From 2016-2018, Ms. Kim was a member of Ensemble Connect, a selective fellowship program under the auspices of Carnegie Hall, the Weill Institute, and The Juilliard School, where she served as an education ambassador for New York City schools. Ms. Kim co-founded Chime for Children, which brings interactive performances to children with limited access to music. Ms. Kim tours with the ensembles Founders and Frisson and has appeared at chamber music festivals including Marlboro, Mainly Mozart, Bravo! Vail, Sarasota, and Banff. Born in Seoul and raised in British Columbia, Yoonah is currently pursuing her doctoral degree at The Juilliard School as the C.V. Starr Doctoral Fellow.

Benny Kim, violin
Whether playing in the intimate setting of a string quartet or performing a concerto on the stage of a concert hall, Benny Kim’s “emotional depth and musical carriage are his real drawing cards. His is a style that touches the peak of romantic violin playing.” (The Washington Post) Known for his versatility as soloist, chamber musician and teacher, Benny’s performances include recital appearances at the 92nd Street Y and the Kennedy Center, festival appearances in Santa Fe, Savannah, Angel Fire, NM and Trondheim, Norway and concerto appearances with the orchestras of Chicago, Boston and St. Louis. Benny serves as first violinist of the Miami String Quartet, appears on recordings of EMI, Koch International and Centaur and is a professor of violin at the University of Missouri/Kansas City Conservatory of Music.
Benny is a golf fanatic and he and his golden retriever, Cubby, make their home outside Kansas City on the Falcon Ridge Golf Course.

Fabiola Kim, violin
Violinist Fabiola Kim was hailed by the New York Times as “a brilliant soloist,” who “played with extraordinary precision and luminosity.” Her CD, “1939,” has received international acclaims from BBC magazine, The Strad, Gramophone and others. Ms. Kim is the winner of various competitions, including the Seoul Philharmonic Orchestra’s Concerto Competition, the Aspen Music Festival Competition and the Juilliard School Concerto Competition, and was a prize winner at the Irving M. Klein International Competition for Strings.

Ms. Kim is an Assistant Professor at the University of Michigan and is on faculty at the Colburn School. She is also the Co-founder and Co-Artistic Director of Sounding Point Academy.

Music Director of the Maui Classical Music Festival since its beginning, Yizhak Schotten came from Israel to study with William Primrose at USC. He won the Concert Artists Guild International Competition in New York with his string trio, and performed in many of this country’s prestigious concert series. He has concertized around the world as soloist and chamber musician, was member of the Boston Symphony Orchestra and later, principal violist of the Cincinnati and Houston Symphony Orchestras. An active recording artist, he is on the faculty of the University of Michigan. He loves to cook and play golf.
Amir Eldan, cello
Amir Eldan performs as a soloist, chamber musician and as guest principal cellist.  He served as Principal Cellist of the Israel Philharmonic Orchestra and as guest Principal Cellist with the Saint Paul Chamber Orchestra.  At age 22, he became the youngest member of the Metropolitan Opera Orchestra in New York, when he won the position of Associate Principal Cellist and was invited to perform with the MET Chamber Ensemble in Carnegie Hall.
Mr. Eldan holds a Doctor of Music degree and Master of Music degree, both from Juilliard where he also served as a guest teacher.  His performances have been featured on television and radio in the U.S., Europe and in Israel.
He taught at the Oberlin Conservatory for fourteen years and was the cellist of the Oberlin Trio.  In 2019, he was appointed Cello Professor at the University of Michigan.

Sarah Oates, violin
Sarah Oates enjoys a varied career combining chamber music, orchestral leading and teaching. As the associate concertmaster of the Philharmonia Orchestra in London she has performed regularly in the great concert halls and around the world. She is a sought-after guest concertmaster with other world class orchestras including the London Symphony Orchestra, the BBC Philharmonic, the Royal Opera House of Brussels, Scottish Chamber Orchestra, and the Dutch National Ballet Orchestra in Amsterdam. Sarah maintains a busy chamber music schedule.  As a member of the Devich Piano Trio she recorded four CD’s with Challenge Records to international critical acclaim. Recent recordings include a CD with Warner Classics, including works by Chausson, with her string quartet, the Philharmonia Chamber Players. She is a founding member of the Phoenix Festival, an annual chamber music festival in Brussels, with Brussels Muzique, an ensemble of international musicians. She is also a member of the Ubuntu Ensemble, a group of South African musicians currently based in the UK and Europe, who come together to perform classical repertoire as well as showcasing contemporary South African composers.

Kurt Muroki, Double bass.   You should know is he Maui-born – went to Baldwin High School
Tenured Professor of Music at the Jacobs School of Music at Indiana University and former Artist-Member of the Chamber Music Society of Lincoln Center, Kurt Muroki began his musical studies on the violin and went on to study the Double bass at The Juilliard School of Music with Homer R. Mensch. Kurt has collaborated with members of the Guarneri, Juilliard, and Tokyo quartets among others. Kurt was also active playing movies, commercials, popular, and classical recordings with titles including the Oscar-winning film “The Departed”, “Extremely Loud and Incredibly Close”, “Julie and Julia”, “Moonrise Kingdom”, The Who, Sting, Peter Gabriel, and Itzhak Perlman among others. He has performed concerto tours throughout Asia and the United States. Mr. Muroki also teaches at the Interlochen Arts Academy and the New York String Orchestra Seminar, and is a New School Concerts Music Advisory Committee member. Mr. Muroki has previously been on faculty at Stony Brook University, New Jersey City University, and The Juilliard School. Mr. Muroki is a D’Addario Strings Artist.